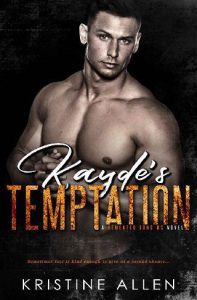 Kayde Maguire became a Marine so he didn’t have to watch the woman he loved, marry his best friend. The problem was, she had been his best friend, too. So leaving home still left him feeling like he’d cut his heart out and left it lying on the ground. For years, he felt like the cold, heartless bastard many people called him. He could kill a man without batting an eye, but being part of the Marine’s Force Recon taught him those necessary skills; It wasn’t what he’d aspired to become. Whether he wanted to admit it or not, deep down, he was still the sensitive young boy who stopped to help the little girl who always fell behind, despite desperately trying to keep up to three rambunctious boys. To keep her “out of sight and out of mind,” after the Marines, he relocates states away and joins the Demented Sons MC with his buddy, Hacker.

Serafina Hernandez claimed Kayde as her best friend when she was only four years old, and she thought he would always be there for her. Kayde, Tyler and her brother, Christian, were known as the “Three Musketeers,” and so when she married Tyler, she never anticipated Kayde would desert them for the Marine Corps. When tragedy strikes, her world crumbles, and she barely keeps her sanity. Lawrence seemed like the savior she needed, but he wasn’t Kayde. When life shows her it can always get worse, and she needs her best friend more than ever, he isn’t there. Unfortunately, he’s the only one she can think to contact when she needs to disappear.

Kayde and Sera were destined to be together, but people don’t always follow the path laid out for them. Hesitation and feeling he wasn’t good enough, cost him Sera once. Can Kayde take advantage of the second chance fate has handed him? Will Sera admit she loves him, or will she continue to push him away, because she feels like she loses everyone she loves?