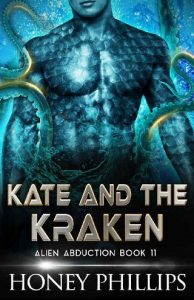 A rebellious alien prince. An overworked human female. A planet in crisis.

Kate spends most of her time in her lab, and as much as she believes in her job, she occasionally longs for a break. Being captured by aliens isn’t exactly what she had in mind.
Neither is being forced to abandon ship and almost drowning in an alien ocean. But the massive alien warrior who saves her? He might be exactly what she needs.
Prince A’tai is desperate to escape his family and their nefarious political schemes. On his way to a remote island, he rescues a smart, beautiful female. She doesn’t belong in his world, but he is determined to keep her.
But A’tai is not quite what he seems, and the planet of Mafana holds more than one secret. Can Kate and A’tai survive political intrigue, a planetary crisis, and their inescapable differences to forge a happy ending?