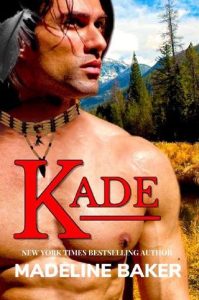 On the run and badly wounded, the half-breed known only as Kade closes his eyes and waits for death.

Riding the outskirts of her South Dakota ranch, Norrie McDonald finds a man lying in the dirt, unmoving, his shirt covered with blood. Thinking him dead, she decides to return home and send someone back to bury the body, but discovers he’s still alive, so she takes him back to the ranch to care for.
As Kade recovers, he learns that the McDonald ranch is heavily mortgaged. A neighboring rancher covets the McDonald place and Norrie’s father suspects him of stealing their cattle and scaring off their hired hands in an effort force McDonald to sell. Against his better judgment, Kade, who has a reputation as a fast gun, agrees to stay on after he recovers, partly because he’s got nowhere else to go, partly because he owes the McDonalds his life, but mainly because he’s attracted to Norrie.
Although Norrie is also smitten with Kade, she is reluctant to admit it. He’s a drifter, a fast gun with a price on his head. But love is stronger than fear and Norrie decides to follow her heart, no matter the consequences.