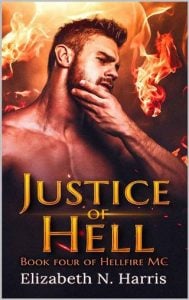 didn’t know where to turn. Until she saw a magazine article and recognised a face. He’d once promised her he’d be there for her, no matter what. But promises are made to be broken. Now she’s alone, in hiding and scared. Her identity has taken a complete overhaul, and she’s decided to live for as long as she can. To hell with him and the false hope he’d given her. She’d make her own way.
One of those secrets smacks him in the face, and he doesn’t recognise her. His betrayal of her sinks deep when he finally discovers who she is. But she’s gone, running like a scared rabbit. A Hellfire brother never stops, not until they reach their goal. Now he has several. Find her, protect her and make her his. But there is just one problem that might come between them; he hopes if anyone can understand, it’s her. He has another name, and that name is Justice.