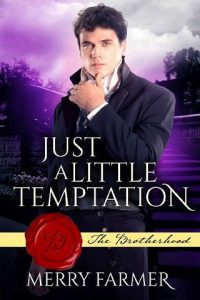 As the owner of an orphanage in a poor neighborhood of London, Stephen Siddel has the weight of the world, not to mention the care of tender souls, on his shoulders. He is a devoted father to dozens of children and an upstanding member of the community, in spite of his rivalry with the local nuns. But his heart and his reputation are overwhelmed by temptation the moment Max walks through the orphanage’s doors.
As a younger son from a grand family, no one expects much from Lord Maxwell Hillsboro, but he is determined to make a difference in the world, starting by patronizing a certain orphanage members of The Brotherhood have told him is in need of help. His heart is instantly engaged in the causes and concerns of the orphans, or rather it’s dashing and seductive owner, Stephen. Max feels he’s found his calling, even though his involvement could put both him and Stephen in danger.
But when some of the children from Stephen’s orphanage and the rival Catholic orphanage go missing, Stephen and Max must band together with the imperious Sister Constance to find them. What they discover is a much bigger kidnapping ring that requires them to join forces with David Wirth and Lionel Mercer of the law offices of Dandie & Worth. Can they rescue the children in time, or is something much more sinister going on? And will the passion growing between Stephen and Max ruin them all?