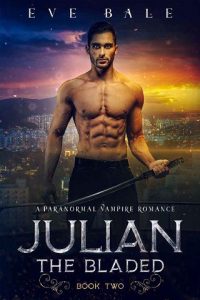 To save the girl, he must embrace the aristocratic lineage he loathes…

Vampire Julian Wakehurst thought he finally found the place he belonged amongst the Bladed. Until they demand he silence a human woman meddling into matters sure to get her killed. The second he meets Miranda he’s drawn to her and vows to do whatever it takes to keep her safe. Yet when his family forces his hand, Julian faces an impossible choice; step into the role he never wanted as the head of the Wakehurst family, or sacrifice the one woman who means more to him than life itself.
Miranda Blaise’s father walked out of her life a decade ago. Since then she’s been consumed by the desire to find out the truth of what happened to him. Discovering he joined the Bladed filled her with the hope that she may finally reunite all that remains of her broken family. Mira can’t walk away from that… no matter what the slew of vampires threatening her say. Unwilling to bend, she’s set on a collision course with the merciless commanders in the Bladed who will do whatever it takes to silence her. Permanently.
Facing down certain death, she never expected to find a love far beyond anything she could have ever dreamed of. Empowered by her bond with Julian, Mira clings to the hope she may just make it out alive.