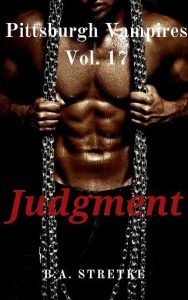 He felt it to his bones, and his instincts were telling him to get Roman to safety whatever the cost. He knelt down next to Roman and brushed the hair back from his face. Such a lovely face and such woeful eyes.
“Do you trust me, Roman?” Zac whispered.

Roman Kaleva has no idea how he ended up here. He is set for judgment for one of the most heinous crimes in the paranormal world, the murder of a beloved, a fated bond. He stands before Master Nikolas Hadden of the Hadden Coven to answer for his crimes. The only problem is he doesn’t understand how he did it. Nothing makes sense. He sees the crime in his memory, but he remembers nothing before or after the murder. It’s all just fog and doubt. He is an unaffiliated vampire living in Hadden Coven terrority; therefore, he must answer to Nikolas Hadden for this vicious crime. How does he even begin to explain that he doesn’t understand how this happened? Is there any hope?

Zac Foster is the second in command at the IT department in the Hadden Center. He’s climbed the ranks and staked out a position for himself in the Coven. He is well-liked and trusted by leadership. He’s worked hard for his life and reputation, its not something someone risks lightly. But when he sees the face of the man in the Ceremonial Chamber, facing judgment by Master Hadden, something calls to him. Something tells him this isn’t right. When he discovers that the man hours away from execution is his fate chosen beloved, Zac will move any mountain, defy any rule; he will defy any master to prove his beloved’s innocence. Zac will save Roman or die trying.