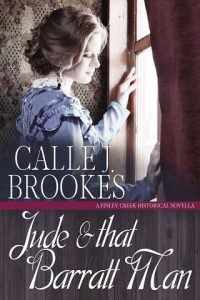 ★ What kind of man abducts brides for his sons? ★

Jude Finley Handley doesn’t understand how anyone could think what that Hughes Barratt and his sons had done was right.
Even if that damned man insisted she and her brother had stolen Finley Creek Ranch right out from underneath the Barratts—taking her four nieces as a trade was just wrong.
She’s going to get her nieces back, even if it means the girls left their so-called new husbands behind forever.
Confronting that Barratt man right in the middle of his ranch might not have been Jude’s wisest idea, though. He is bigger, stronger… and they are all alone.
And…
Hughes Barratt is looking at her with a particular glint in his eyes that says he isn’t quite finished with the Finleys, after all…

★ Act in haste, repent in leisure…★

Maybe he’d been hasty, insisting Jacob Finley trade his four oldest daughters to his sons for that old ranch, but what was done is done now. The girls were married legal and proper. There is no backing out of it in the clearer light of day.
Hughes had been damned angry at the time. He may have overreacted to the land theft, just a tad bit.
But…his boys would have eventually courted Finley’s girls, anyway. This way, he just got things moving along quicker. Besides, his boys knew how a wife should be treated—they’d protect the girls, love them, and be… honorable.
Once the girls forgave them.