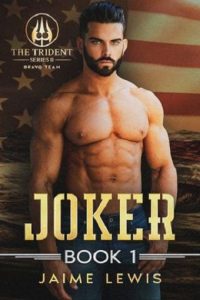 Being the only woman helicopter pilot of a team handpicked by the President of the United States should have been intimidating. But not for Clover “Lucky” Walker. She was born to fly. Being at the controls of her modified Blackhawk was where she felt empowered. No mission was too difficult for the pint-sized dynamo. She took on any challenge thrown her way and succeeded. That wasn’t saying she hadn’t had a few close calls.

Being the daughter of a highly decorated retired Marine Colonel and a little sister to four brothers, all serving in the Special Forces, Clover had a reputation to uphold. However, her overprotective family members were in the dark about her classified position in the Situational Combat Unit.
Her reputation was so good she hadn’t realized that traitors inside her own unit and government were using her abilities for their own personal gains until it was too late.
After a simple mission turns deadly, and Clover is put in the crosshairs of those wanting to harm not only the United States but also her, she is given two choices—be placed into a witness protection program or hide out in a safe house with a certain U.S. Navy SEAL who rocked her world and shattered her heart.

U.S. Navy SEAL Landon “Joker” Davis had been thrust into many situations during his career and was always prepared to the best of his ability. But when the President of the United States summoned him, he was unprepared for the assignment handed to him—protecting the feisty, blonde-haired woman who affected him in ways that even he had trouble understanding.
Will both parties be able to push aside their personal feelings towards one another and work together to combat the danger closing in on them?

When all is said and done, can they have a future together?