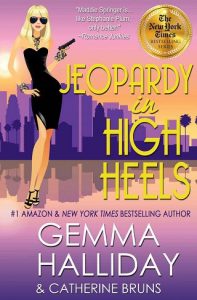 When death hits a contestant on America’s favorite game show, fashion designer turned amateur sleuth is on the case!

Maddie Springer may know more about fabulous heels than tough trivia, but she’s thrilled when her hairdresser-to-the-stars stepfather, Fernando, earns a spot on a celebrity edition of American’s favorite game show. But she’s not so thrilled when, after taping ends, one of the other contestants dies, the media are suddenly everywhere, and one reporter in particular is threatening to not only point the finger at Fernando, but also expose his biggest secrets to the world!

The victim was Doggy Z, a famous rap artist turned recreational marijuana supporter turned cooking show co-host. And it seems everyone in his life had a reason to want him dead—from the 4 ex-wives he was serially unfaithful to, to his deceptively wholesome looking cooking show co-host, to the network executive seen arguing with Dog just before his death, and even the soap opera star who competed against him on the trivia show. Now it’s up to Maddie to sift through the suspects and figure out just which person the rapper may have wronged enough to want him dead. With the help of her Hollywood BFF, her hot homicide detective husband, and her endearingly meddling mom, can Maddie track down a cold blooded killer… before she finds herself in final jeopardy?