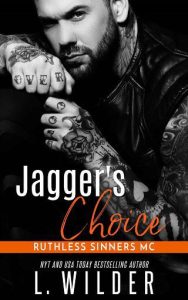 Bestseler l L. Wilder brings you a new addition to the Ruthless Sinner series. Jagger will show readers just how hard it is to resist a bad boy with a good heart.

He hadn’t meant to let her in.
She was just supposed to be his ticket out…
But she became so much more.
After four long years, Jagger was finally being released from prison.
And there was only one thing on his mind—Sophia Grace.
Jagger’s Choice is a short novella that will have you rooting for forgiveness, mended hearts, and second chances. This is the seventh installment in the Ruthless Sinner series and is a standalone romance with no cheating an HEA.