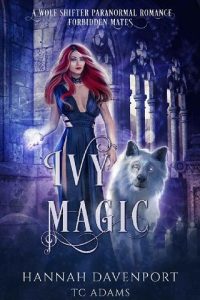 Ivy
Abandoned at birth, the system passed me from foster home to foster home until Caroline, a puma shifter, took me in. Although grateful, I never learned about wolf shifters, their tendencies or hierarchy. But as Caroline constantly pointed out, I was no mere wolf, but also something else, something dangerous. She encouraged me to hide my magical side, claiming that if the council found out, they would have put me to death.
Working for The Agency gave me the autonomy I needed to keep myself hidden. I policed all supernatural species—vampires, witches, fey, elves, shifters—if you possessed magic, you fell under my jurisdiction. I had loyalties to nobody except my job and my roommate, a human named Kelly.
But hiding my magic proved difficult and left me with one option when it needed an escape.
Find a one-night stand—check.
Make sure he can handle my wolf – check.
Make sure he’s not my fated mate—oh shit!
In the name of self-preservation, I ran!

Luca
The vampires were organizing again, preparing for war.
As Regional Alpha, I oversaw several large and small packs. With shifters missing and killed, I needed to gather as much information as possible before confronting The Agency. I never expected to meet my fated mate in a small tavern in the middle of nowhere.
She refused to tell me her last name, and after one night of passion, she disappeared. My wolf pushed me to find her, mark and claim her as our own. But I had no leads to go on. Ivy—if that’s even her real name—had ghosted me.
And then I find that I am not the only one after Ivy.