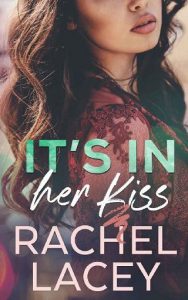 Two Broadway actresses, one starring role, and a kiss that might turn rivals…into lovers.

Sophie Rindell has dreamed of performing on Broadway since she was a little girl. But after more than ten years of auditioning, she’s still waiting tables and sleeping on a friend’s couch while she waits for her big break. When she lands an audition for a new musical called It’s in Her Kiss, she’s sure this is the one. Not only is she auditioning for the lead, but it’s a queer role, the role of a lifetime for Sophie.
Julia Vega has been working on Broadway for years now, but she hasn’t landed a starring role…yet. When she meets Sophie at the audition for It’s in Her Kiss, she senses a kindred spirit. They’re both talented and driven, but unlike Sophie, who’s been out since high school, Jules is still coming to terms with her sexuality. This role—if she lands it—could help define more than her career.

As their rivalry heats up, Jules and Sophie fight an attraction that blazes hotter than the spotlight. When the curtain rises on opening night, love might take center stage.