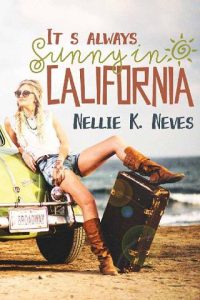 She rolled in with the tide and brought trouble with her.
But while she’s running from her past, he’s hoping to be her future.

The first time Rhett saw her, she was sitting on the hood of her wrecked Volkswagon Beetle. She needed help, even if she wouldn’t ask for it. His mystery girl refused to give her name, but always playing the hero, Rhett decided to rescue her anyway. Deciding to call her Sunny, she settles in at the ranch working as the groom. But life isn’t that easy. With Rhett’s dad ready to give her the boot at any moment, and Sunny’s past rearing up in their faces, it’s far from smooth sailing.

Sunny had no choice but to leave home. She grabbed whatever money she could, bought a used car, and drove it as far as the engine would allow. It would have gone further if she hadn’t launched it from the sand dunes in a desprate attempt to escape and crashed on Rhett’s family beach. Sunny didn’t want to take advantage of them, but choices weren’t abundant in that moment. Survival drives people to do crazy things. If taking on a fake name bought freedom and security, then so be it. The alternative was dire. If she went home, they’d make her vanish… permanently.

Rhett isn’t sure he did the right thing bringing in a perfect stranger. Her nightmares chill his bones. The people looking for her say she’s a criminal. But that’s hard to believe when he watches her work her magic with the horses. In fact, it’s hard not to fall head over boots for a woman like Sunny. But if he plans to keep her safe, he has to resist the pull. Criminal or not, it’s clear her life hangs in the balance. He has to figure out why she’s running before they find her and end it once and for all.

Stuck between wanting to prove himself to his family and keeping a stranger safe, Rhett has to walk a razor thin line, because the wrong choice will be his last.