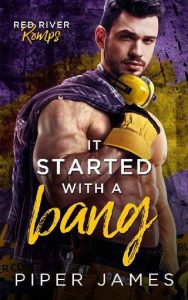 First, I hit him with my car. Then I hit him with an offer he couldn’t refuse.
Annabelle
My father really outdid himself this time. If he wasn’t already the worst, his newest demand surely gave him that title—if I wanted to take over the family company, I needed to get married.
Within the next six months.
He thought he had me right where he wanted me…that I’d marry one of his lackeys. A man who’d keep me in line with Dad’s vision for both me and Parker Industries.
Well, dear old Dad had another thing coming. I was no pushover, bowing to the whims of him or any man. I had a plan. And that plan’s name was Ryder Perry.
Ryder
Red River, Texas was worse than I thought it was going to be when I moved here with my brothers to renovate the old ranch home we inherited from a distant relative. Mosquitos, flies, and the lung-clogging humidity were making me miserable, and that misery was only compounded when a spoiled rotten princess slammed into my truck and had the audacity to blame me.
The next time I saw her, she offered me two things—an apology for her behavior and a million dollars…to marry her.
I thought she was drunk. Or crazy. Or maybe a little bit of both. I wasn’t sure.
But one thing was for sure—my time in Red River just got a lot more interesting.