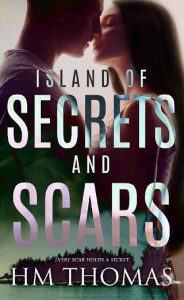 Every scar holds a secret.

Betrayed by her fiancée and reeling from an attack that killed their unborn child and left her injured and scarred, obstetrician Cameron Crawford flees to a remote island in search of the healing and peace that elude her. Six years later, she thinks she’s found both serving as the island doctor and raising her young daughter.
Dr. Ian Gauthier has never stopped searching for the fiancée who disappeared six years ago. He’s all but given up hope of ever actually finding her, until a plane crashes on a remote island, and he and his team of doctors are called in to assist the island’s doctor—the woman he’s mourned for half a decade.
Cameron thought the plane crash would be her biggest obstacle, but the accident draws two men from her past to the island. While one man threatens the fragility of her still healing heart, the other threatens the safety of the family she’d die to protect. In order to save one, she may have to sacrifice the other.