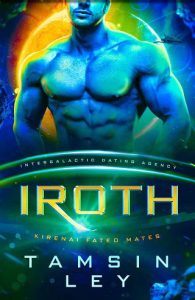 A smuggler running solo
Iroth doesn’t deal in live cargo, but the job on Earth’s too good to pass up—purchase a female, escort her to Kirenai Prime, and rake in the credits. Except it was all a setup. Now he’s on the hook for attempting to assassinate the crown prince. To avoid being shot on sight, he’s forced to assume the shape of one of the human’s primitive four-legged pets. But as a mysterious ailment threatens to compromise his disguise, he seeks refuge with a breathtaking female who turns out to be as strong as she is sweet, and his plan to escape goes to the dogs.

A caregiver with nerves of steel
Maise expected to leave the charity auction with a hot date. Instead, she goes home with a wounded Great Dane and a whole lot of questions. When the giant canine transforms into a sultry blue alien with turquoise eyes and asks for her help, she can’t refuse… until she helps him back onto his space ship, and he won’t let her leave.

She’s determined to find an escape, but the more time they spend together, the more she suspects he’s not the alien monster she imagined. But will her strength and kindness be enough to melt the armor around his heart?