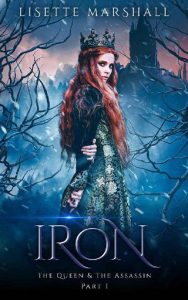 He was supposed to kill her, not to melt her iron heart…

The Queen
Two years ago she poisoned her violent husband. Now Tamar, Queen of Redwood, rules her kingdom on her own, with an iron fist and a closely guarded heart. Surrounded by scheming nobles, she can never afford to lose control of her court – or of herself. But when an infuriatingly handsome assassin breaks into her room one night, her careful web of authority shatters at once.

The Assassin
Raised in the treacherous Taavi Empire, Runo knows every rule of survival. Don’t love, don’t get attached. Kill, and live. His newest target may wear a crown, but thanks to a traitor offering him an easy way into her rooms, even the Iron Queen of Redwood will have to make peace with her mortality soon. Except that Tamar turns out to be everything but the easy prey Runo assumed…

A Dangerous Alliance
But as they play their deadly game of survival, a far greater danger looms. With a nameless traitor now out for both their lives, the queen and the assassin have no choice but to close an uncertain alliance. And as shadows of the past draw them deeper and deeper into a tangle of deceit, sizzling hate turns into something much more dangerous…