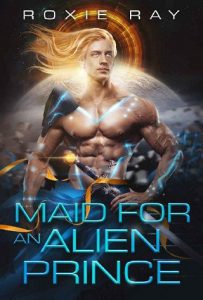 Four hulking aliens… Four determined mates… Four scorching novels of out of this world love! This collection contains Maid For An Alien Prince, Nurse For An Alien Warrior, Teacher For An Alien Doctor, and Assistant For An Alien Ruler.

This bundle contains four steamy standalone alien romances where human women win their HEAs with scorching aliens they could never find on Earth.

Maid for an Alien Prince
Brittany has seen the worst the rich and famous have to offer and there’s no way she’s falling for a hunky alien prince. But soon Niall awakens forbidden emotions and calls her his mate!

Nurse for an Alien Warrior
Abby’s in space to raise a kid, not make one. But Raider Kain needs a surrogate, and the alluring Abby is everything he never hoped he’d have. He’ll claim her as his mate … if he can convince her to stay.

Teacher for an Alien Doctor
Maya won’t fall for an alien after finding out what aliens did to her sister. But Alien doctor Soren isn’t what she expects, and she can’t fight the feelings he raises in her. Can she mate with him and still get justice for her sister?

Assistant for an Alien Ruler
Gayle’s ready to leave her old career behind … until she’s brought to Macros under false pretenses. Gorgeous green giant Rahl is her boss and there’s no way she’ll fall for him. But a fated mate bond is too strong to deny.