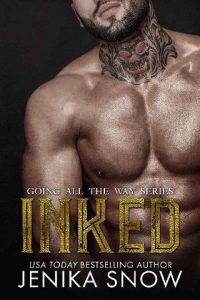 Around town, Cadeon Morris was known as trouble. He rode a Harley, owned a tattoo shop, and inked the local motorcycle club. He was who he was and explained himself to no one.Stella was the daughter of Mickey “Scars” Lore, President of the MC in the town of Reckless. She was used to the members of the MC threatening and scaring off any guy who showed interest in her. But at twenty-three, she wanted to experience life for herself, go wild, and do something she may regret later.
It was time for Stella to get a little ink of her own, and Cadeon was going to be the man to give it to her.Getting it on with a bad boy sounded like a pretty good way to let loose, and it was only meant to be temporary. But it seemed Cadeon wasn’t all about a one-night stand kind of fling.He wanted it all.He wanted Stella.
Reader note: This was previously published under the same title. It has since been recovered, reedited, and revised.