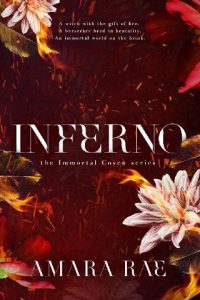 A witch with the gift of fire. A berserker bred in brutality. An immortal world on the brink.

Willow:
I’ll do anything to protect my coven… even if it costs my life. We have far too many enemies, including among our own kind, because our fathers weren’t human. Witches aren’t supposed to mate other immortals.
As a coven of hybrids, we have to work twice as hard to survive.
But things can always get worse.
We’ve gone on the offensive, and the leaders of witchkind won’t let it stand. If we’re going to defeat them, we need more allies. The pickings are slim, so it’s up to me to broker a deal with the berserkers, an immortal race thought to be extinct. They won’t be happy to see me.
After all, it was my kind that nearly annihilated them.

Toric:
I lead my kind through strength and adherence to custom. It is the berserker way.
Now Willow has come, disrupting my brood. She is the most intriguing female I have ever encountered.
She wishes to partake in the trials to earn her right to look upon me. Only then may she make a request of me.
She will not survive them. But while she fights in the arena, I will make her mine.
For I rule all before me, including the witch with the soul of a warrior.

Note: Inferno is a deliciously dark and steamy paranormal romance. It features forced proximity, fated mates, a brutal and inexperienced hero, and a badass heroine who brings him to his knees. Each book in the Immortal Coven series has an HEA for the couple, but the series has an overarching plot. See: Note for Readers in the book for the content warnings.