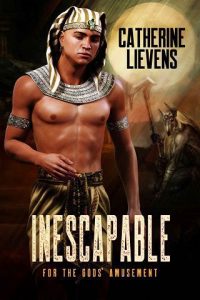 Sed might be a god, but that doesn’t mean he wants to live as one. That’s why he left his family years ago, and why he’s not looking forward to going back. The only reason he agrees is that as the protector of kingship, he’s needed to help the new king go through his coronation ceremony. Once that’s over, Sed has every intention of going home.

Mery never wanted or expected to be king. But he’s a descendant of the old pharaohs, and agreeing to sit on the throne means helping his family, so he doesn’t hesitate. Being king isn’t quite what he expected, though, and he suspects something is happening he doesn’t know about.

Once Sed gets to know Mery, he knows he can’t just leave as soon as the crown is on his head. Someone is plotting and trying to manipulate Mery, and Sed can’t abandon him when he needs him most.

The fact that he’s falling in love with Mery complicates everything.

Mery is the new king, while Sed is a god, albeit a minor one. Will Sed be able to keep him safe, or will they both lose everything they’d never thought they’d have?