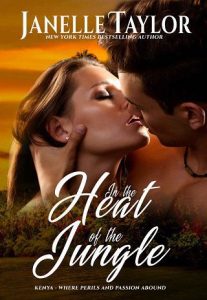 Laura Leigh Webster believed she could conquer the challenges of an adventurous safari in Africa. Arrangements had been made by her grandfather before his death. A sad event which made her a wealthy English heiress and the legal ward of Lord Chadwick Hamilton until she was twenty-one. Yet, she was annoyed to be saddled with a legal guardian; she was a grown woman, capable of taking care of herself and her affairs. After all, it was 1896! Without warning, her existence and emotions were changing fast. Ever since a chance encounter with a captivating stranger in London, she presumed their paths would not cross again. Never had she thought her biggest challenge would be a handsome and enigmatic guide named Jace Elliott, the irresistible rescuer who filled her dreams and aroused her passions. Chad had told her the man was unpredictable, a past criminal, but the best choice to be their guide in the hazardous landscape. Every fiber of her being warned her he should not be trusted or—Heaven forbid—loved…

Jace wondered what the golden-haired American was doing in his lush green territory with his cunning enemy. Had Chad brought her there to use her sensuous beauty and many charms to ensnare him and lure him back to England to battle false charges, to have him imprisoned for life, or hanged? His emerald gaze studied her with great intent; she was loin and soul stirring. She was the most beautiful, tempting, and enticing female alive. Dare he trust her? Had they truly met by accident long ago when he rescued her from a brutal attack? Or had Fate intervened?

Leigh reasoned, if the many serious incidents were not “accidents” or “mistakes” on her part, who wanted her injured or dead? It was unlike her to be careless with her life and safety. She sensed the dark tension between Jace and Chad. She was attracted to the virile specimen, one of the many suspects on her mental list. Was he a predator and she, his prey? Or had destiny thrown them together both times? All she knew was that her survival was in jeopardy and that life-threatening perils and white-hot passions abounded IN THE HEAT OF THE JUNGLE…