Home
contemporary romance
In It to Win It by Sharon C. Cooper (ePUB) 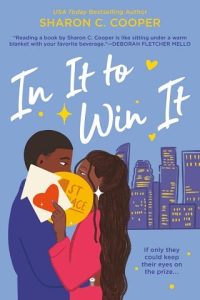 In It to Win It by Sharon C. Cooper – Free eBooks Download

Spoiled, fickle, and flighty are only a few adjectives that have been used to describe Morgan Redford. She’s never had to worry about money, but she’s determined to build a career on her own and do something meaningful with her life—by helping children who are aging out of the foster care system. She has her eyes on a property that a family friend is selling, which is perfect for these young adults to live in, but her competition is someone she never expected…
When Los Angeles real estate developer Drake Faulkner learns that his eccentric mentor is selling property that is perfect for his portfolio, he jumps at the chance to buy it. But he soon learns the billionaire has other ideas: buyers must compete in an Iron Man competition of sorts for the property. Drake refuses to play along with this ridiculous demand…until he finds out Morgan, his ex who left him years ago without a word, is one of the potential buyers. No way is he letting her—Little Miss Self-Absorbed—win the property he wants. Bitter? Yes. Petty? Probably. But as the gauntlet of games heats up and forces them to face the past, they are met with a pull that feels all too familiar.

Now, if they could only keep their eyes on the prize and off each other—but who’s to say they can’t do both?