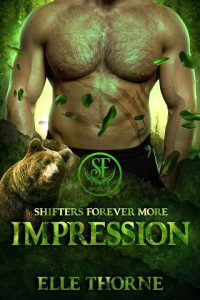 Salvatore Draecen, a dragon shifter who long ago lost his mate and recently found his daughter, has received word about a sorceress being held captive in Crossroads. A sorceress, that word has it, looks way too much like the love of his life. The one he lost ages ago. The mother of his only child.

Think Salvatore wouldn’t go through heaven and hell to get her back? Think again.

Selene Campione has been a prisoner for more years than she can count. Truly. More years than she can remember. Devoid of her powers and memories, she’s been in a muddled state of mind, the victim of experimentation at the hands of the group at Crossroads. Now, as fate would have it, her powers are returning. And so are the painful memories. The last time she saw Salvatore, he was on another continent, safe and sound. Her daughter Allegra was safe with him. She’s given up hope of seeing them again. But she hasn’t given up hope of escaping her captors.

She’s got to find a way to free herself—and another dozen sorceresses who are held captive in the underground caverns below Crossroads’ hospital wing. And she’s got to do it without getting anyone killed. Anyone good, that is. For she plans to wreak havoc on the bastards that have kept her imprisoned. She’s got nothing to lose, after all, since she’s already lost her mate and her daughter.

Nicely tying up the Shifters Forever More series, Salvatore and Selene’s journey to finally be together will be as epic as Griz and Allegra’s!