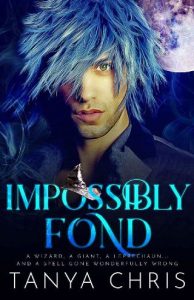 When a hostile leprechaun forces an inept wizard to flub the spell he’s casting on a mini-giant, the result can only be… fondness? Waltham has accidentally spelled Ian into liking him, and now his hostage/windfall, aka Mindy, insists he fix it before she’ll turn over the pot of gold she rightfully owes him.

Waltham’s figure is as stringy as his hair, and his words are as sharp as his nose. He’s a selfish, greedy fledgling wizard with a ratty hat and a worse attitude. There’s no way someone as handsome and kindhearted as Ian would like him without magic in play. But as the three reluctant companions set out on a quest to assemble the ingredients for an anti-spell, a different kind of magic happens. Ian’s unflagging belief that Waltham is worthy of love makes Waltham begin to wish it were true.

There are grasshopper gonads to be collected, moonbeam crystals to be harvested, kitten tears to be wrung, and somewhere, at the end of the rainbow, a pot of gold to be won. But if Waltham can overcome his upbringing and mend his ways, then maybe—once the spell has been lifted—something real will remain.