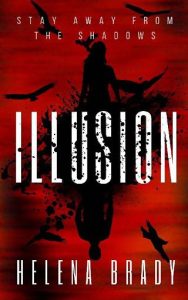 It was just an illusion, nothing more…

Twelve years ago, Ravyn watched her mother die after a man emerged from the shadows and killed her. But nobody believed her. Now seventeen, she wants nothing more than to leave the horrors of her childhood behind, and escape from the shadows that continue to haunt her.
When she meets a group of people just like her, people who can see these beings of darkness, everything changes. Ravyn isn’t as alone as she thought. She is introduced to a world of magic she has lived in without ever realising it. Desperate to escape the past, Ravyn agrees to go with her new friends so she can explore what this magical world has to offer.
But the shadows are growing restless. They know who she is. They know that her mother’s magic has passed down to her, and it won’t be long before the full force of it is running through her. With history set to repeat itself, Ravyn must learn how to embrace all that has happened and use it to help her destroy the people who have caused her so much pain. Unless she can fend off the darkness, Ravyn and her friends will suffer the same fate her mother did all those years ago.
The Shadows are dangerous, but she is much more so.