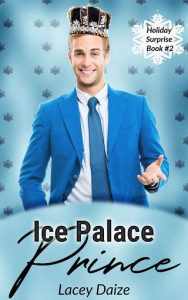 Sean’s not looking forward to another year of playing the Ice Palace Prince.
When Sean came up with the idea for Valle Granja’s Ice Palace and Winter Village market for the holidays, he never imagined that he’d be named the honorary prince of the event. Now, several years in, he can’t seem to ditch the title. But at least there’s one perk. He gets to admire one of the business partners for the event, a man he knew in hich school: Lowell. It’s just too bad the handsome alpha is probably already taken.

Lowell’s been attracted to Sean since high school, but never dared to say anything.

Between being a nerdy alpha during high school, and not wanting to face off against Sean’s alpha girlfriend, Lowell’s always admired the other man from afar. But as he interacts with the gorgeous omega he starts to wonder if everything he knew about the him was true.

But even if Sean’s available and likes men, would he be interested in Lowell?