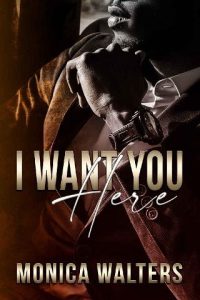 While everyone in the family is finding love and starting families, Chad Berotte feels like his life is at a standstill. His job is stressful as ever because of an issue that reaches back over ten years, and his past situations regarding love have affected him negatively, losing his mother being the main one. The loss of her has played a part in his ability to give and receive love, and he doesn’t know how to get past it. He doesn’t even realize it is an issue for him until Alexis Fontenot enters the picture. Whenever he decides to proceed in a relationship with her, an issue arises to make him retreat. His heart wants her, but his mind wants to refuse the mere thought that there is a woman alive that can make him happy.

Alexis Fontenot has been in love with a man that doesn’t seem to even care enough to acknowledge it. Her body and heart crave love, and the lack of it causes her to make desperate decisions that only offer temporary relief, ultimately leaving her unsatisfied and unfulfilled. Like Chad, she also realizes that she’s craving love so strongly, because of her father’s absence in her life, although she is the one who kicked him out of it. When it comes to Chad, Lexi has the patience of Job and wants to wait for him to realize how strong their chemistry is, only for him to string her along throughout his indecisiveness. His communication skills are lacking, and Lexi’s endurance is starting to fade.

The back and forth is wearing Lexi thin and destroying her from the inside out. What she wants from Chad seems to be impossible, and she wrestles with letting him go for good. Chad, however, realizes that he can’t allow her to slip from his grasp yet again, or he may not be able to get her back this time. Will he get it together in time or will it be too late?