Home
contemporary romance
I Heard It All Before by Chenell Parker (ePUB, PDF, Downloads) 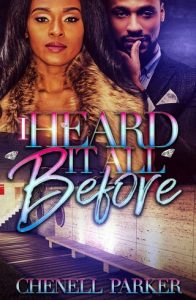 I Heard It All Before by Chenell Parker – Free eBooks Download

It’s been said to always forgive, but never forget. For Camden “Cam” Davis, doing either task seemed almost impossible. Raised by his single mother, Cam’s disdain for his absentee father intensified as he grew older. Being his father’s only child, Cam was afforded many luxuries that other kids his age weren’t. His upbringing seemed normal to his adolescent mind until reality stepped in. After rejecting his family’s financial support, Cam made money the only way he knew how. With his girlfriend, Asha, by his side, Cam soon found out that getting money the easy way was harder than he thought. Jail or the grave were his only two ways out and he found that out the hard way.

Asha’s love for money outweighed everything, including her love for Cam. When Cam decided that the street life was no longer one that he wanted to live, Asha had a hard time adjusting. Being broke wasn’t a good look, in Asha’s opinion, and she was unwilling to compromise for Cam’s sake. Nothing or no one was off limits when it came to her conquering the almighty dollar. She loved Cam with all her heart, but he had to either roll with her or get rolled over.

Being the youngest attorney in her firm was an accomplishment that Demi was very proud of. She worked hard to make a name for herself and her career had finally taken a positive turn. Regrettably, the same couldn’t be said about her home life. Demi’s husband, Kamari, was a former dope boy who found it hard to leave the only life that he’d ever known. Being orphaned from birth, Kamari had been fending for himself since he was sixteen years old. Meeting and marrying Demi had changed his life in a good way, but their differences was beginning to drive a wedge through their once happy union. Kamari loved his wife more than anything, but his alter ego was having a hard time staying concealed.

With a host of supporting characters, watch how the lives of Camden, Demi, Asha and Kamari intertwine in a way that none of them could ever imagine. With lies, secrets, betrayals and deception on the horizon, it’s almost impossible for everyone to walk away unscathed.