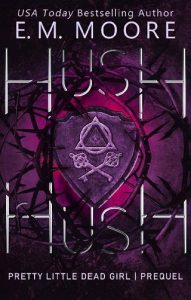 Hush, hush…
Be a good girl, don’t make waves.
Hush, hush…
Be seen, not heard.
Hush, hush…
Be pretty and social, not overconfident.
• • •
These are the rules of the elite where being female means being a showpiece. The old guard doesn’t care what’s in our brains, and the Knights are the worst offenders.
The longest running secret society won’t change easily, but that doesn’t mean I’ll stop trying. They uphold the standards we live by. They make men… Or break them.
I may have gotten an “in” because of my father, but I’ll become a full-fledged Knight because I’m strong and smart…and I freaking deserve it.
No one will stop me, especially not Keegan Forbes. The bane of my existence. My biggest tormentor. And my fiancé…