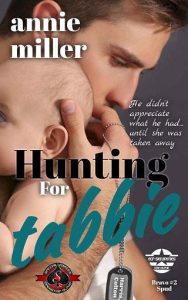 Special Warfare Combat Medic, Cole “Spud” Harris enjoyed being carefree and single. With no one special in his life, he had successfully avoided commitments and was happy just the way things were.

Felicity Campbell had just begun her veterinarian career in Texas when her estranged sister asked for an unthinkable favor, that would put her life and career on hold.

When Cole received an unexpected call from Felicity, his ex-girlfriend’s kid sister, he knew it wasn’t to catch up. However, he wasn’t prepared for what she told him. He’d been awarded custody of her niece, by a woman he’d not seen in six years.

Cole’s priority was his career until an unhinged woman kidnapped his child. He and the ECP Bravo team go on a manhunt looking for the child he never knew he wanted, only to discover the woman he needed by his and his daughter’s side.