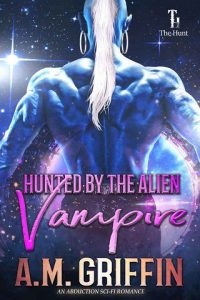 Hunted by the Alien Vampire (The Hunt #4) by A.M. Griffin – Free eBooks Download

He refuses to die…

The Hunter.
When Bounty Hunter Fanian Uldri is contracted to hunt a human female for a wealthy client in a game called The Hunt, he believes it will be the easiest credits he’s ever made. An ordinary human wouldn’t stand a chance against him. Easy, right?
Wrong.
The human he has in mind is proving to be more than he anticipated. In a game of will and wit, he finds himself enjoying the challenges with the female. Will he be able to turn this worthy adversary over to a male who won’t appreciate her, or will he defy his own rules and keep her for himself?

She refuses to give up…

The Prey.
As a struggling single mother of two, Miranda Murphey thought her life couldn’t get any worse. Then she woke on an alien planet trapped in a dangerous game that could mean life or death for her small family. Miranda knows her chances of winning and returning to Earth are slim but she refuses to give up. All she has to do is elude the hunter who intends to sell her and make her way to the finish line.
With their lives on the line and the children’s safety at stake, Miranda has to trust the last person she’d ever thought she would—an alien who refuses to die no matter how many times she kills him.