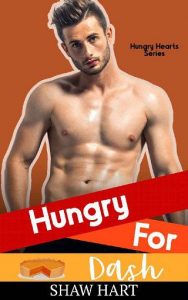 Gracelyn Moore just started a new company. After rumors started swirling at her old job that she was sleeping with a client that she would never touch in a million years, she decided that it was time to move on. She just wants to focus on her future, on getting her new party planning company with her best friend off the ground. Then she gets hired by Dash.
Dash Montgomery is a successful software designer who thought he had everything that he needed. Then he sees Gracelyn. One look and he’s sure that he’s found his one. A lifetime of working with computers has left him unsure of how to approach her so he does what he thinks is logical and hires her.

Gracelyn keeps telling herself that she can’t be with Dash. She can’t have rumors of her sleeping with her clients plaguing her new business but there’s something about him that Gracelyn can’t get out of her head.

Will Dash be able to convince Gracelyn that they’re meant to be?