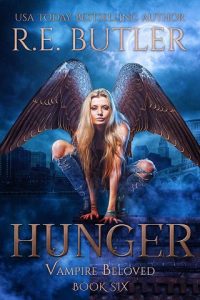 Jude Devoe has been an outsider her entire life. As a hybrid, latent shifter, she has one foot in two vastly different worlds. The world of her wizard father and the world of her falcon mother. Because she can’t fully shift, she focuses on magic and taking care of Lahn, her wizard brother. Ever since the leaders of their nest killed their parents, Lahn’s been driven by revenge. His need for vengeance sends them to Cleveland to take out the vampire coven on the behest of the anti-vampire church leader. Jude will do anything to keep her brother safe but going after innocents is a step too far.

Vampire Temple has been around a couple hundred years, but he’s never felt anything like the draw to an elusive female he saw in a video. He has no idea what she really looks like, only that her people have branded her an outcast and she is working for the anti-vampire church. When he scents something amazing outside the club one night, he knows it’s her, and he follows his instincts to locate her. He finds her hiding out with her wizard brother after planning a devastating blow to the coven.

Can Temple get past her connection to the church, or will he always wonder where her loyalties lie? Will they both come out on the other side alive when her brother interferes in their relationship in a dangerous way?