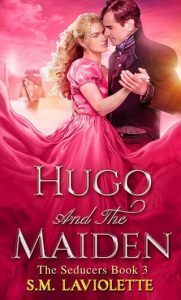 Hugo and the Maiden (The Seducers #3) by S.M. LaViolette – Free eBooks Download

Hugo Buckingham was perfectly happy with the life he’d built for himself. With his steady clientele and co-ownership stake in the most exclusive brothel in London, he had everything he needed. But that was before. Before he was falsely convicted of a crime and tossed onto a ship to New South Wales. Before the ship went down and stranded him on the tiny island of Stroma.

Miss Martha Pringle is everything he’s not—virginal, kind, and sweet. A good person. She deserves so much better than the likes of him. But that doesn’t stop him from wanting her, needing her, with an urgency that borders on terrifying.

Now, Hugo has a choice to make. Should he go home, clear his name, and return to his old life—or stay with Martha and build a new one?
But more importantly…will Martha even want him once she discovers what kind of man he really is?