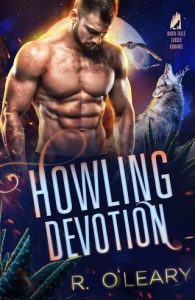 Desperate for a shot at claiming his mate, Beau will do anything to get the stubborn owl to give him a chance…even if he has to hijack her investigation.

When a mysterious monster starts making trouble in Las Vegas, Alice leaps at the opportunity to prove she is more than just a scatterbrained librarian. A little time away to wallow in self-pity, hunt down a monster, and maybe get a nice tan is exactly what she needs… unless a certain wolf has other plans.

For months, Beau has chased his fiery mate. She’s stubborn, smart, and… nothing like he expected. But from the second his wolf laid eyes on the stubborn owl shifter, he’s known she was meant to be his. Frustrated but determined, Beau will do whatever it takes to win her over–even if he has to follow her across the country to do it.

A wolf only gets one mate and he’ll be damned if he lets her get away.
Alice isn’t sure how much longer she can resist his bad-boy charm… or if she even wants to. Enduring the wolf’s fierce devotion might just be more than she bargained for.