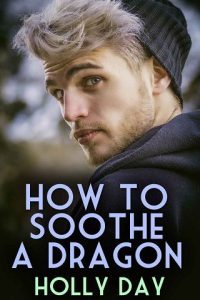 How to Soothe a Dragon by Holly Day – Free eBooks Download

Derek Herman is living a nightmare. Long before he was born, the planet was taken over by a mind-controlling alien race, and everyone is affected except for him. Derek does his best not to draw attention to himself, but it’s not going well.

Ocren Starburst is obsessed with his human neighbor. Every time he sees Derek, he wants nothing more than to grab him, hold him, and keep him forever. And four years of chasing him up the stairs in their apartment building has resulted in Derek refusing to even acknowledge his existence. That is, until Derek accuses Ocren of breaking into his apartment.

Derek found a button on his living room floor, the same kind of button Ocren wears on his police uniform. And while Ocren hasn’t broken in, he knows the button means someone has. Ocren’s race has kept their shape-shifting abilities secret for years, but now his other form wants out to slaughter everyone that dares to get too close to Derek. And staying in control proves hard when threats toward Derek increase.

Will they be able to keep Derek safe without Ocren losing control of his dragon self?