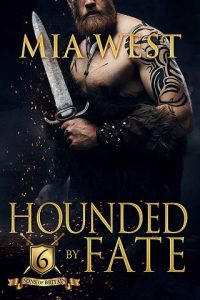 A wolf on the run from his demons.
The one man who can tame his wounded heart.

None of it was Cai’s fault. Or so he’s told himself for years. Only, it no longer holds the scent of truth.
With guilt nipping at his heels, Cai flees as far north as he can. By the time he stumbles into a barbarian hunting camp, he’s nothing but fur and bones and a death wish.
It’s just his luck that among the strangers are a small girl with strength to spare and a man whose sure hand sparks an unsettling instinct to obey.

Raised by a brutal despot, Agravain is determined to be a better father to his daughter. He has enough problems without adding this pathetic excuse for a wild wolf to his burdens.
But he doesn’t count on his lass’s quick attachment to the beast, nor how helping the wolf mend eases the loneliness of their island home.
And he can’t explain at all why the creature seems to understand him better than anyone else.

Meanwhile, a surprise visitor to Arthur’s shifter compound could corner him into finally accepting a few truths that have dogged him for over a decade.

HOUNDED BY FATE is the 6th novel of the SONS OF BRITAIN series.
Tropes: on the run, secret identity, alpha/omega, found family, redemption

Content Notes: killing in defense of self and others, injury, intimacy in shifted forms, terminal illness (secondary character), suicidal thoughts, mention of murder, mention of infanticide by drowning, mention of past partner/parent death