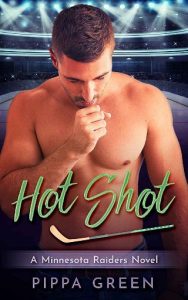 When my sister told me she had hired a new nanny by the name of Esther to watch my rambunctious kids, I expected an elderly grandmother type.

I was completely wrong. Utterly wrong.
Esther Richardson might have been a child prodigy violin virtuoso in her youth, but right now she’s making waffles like a master and completely showing me up in every way possible. She’s also walking around in sexy outfits and making my life miserable.
As captain of the Minnesota Raiders professional hockey team, I’m all business. I’m Puck Daddy on the ice. At home, I’m trying to keep my hands off of Esther—and failing.
I haven’t had feelings like these for a woman since my wife died. Esther is my kids’ nanny. It’s wrong to want her this badly. Isn’t it? I no longer know.
One thing’s for sure: I want out of the Single Dad Hockey Players Club.
Can I convince Esther to give me a chance? To give us a chance to see where this goes?

*Hot Shot is Book 1 in the Minnesota Raiders series following sexy single hockey player dads on and off the ice.