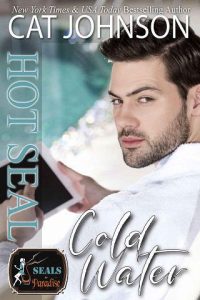 When a Navy SEAL on leave clashes with a Hollywood producer with bad directions and a worse attitude, they both find something they didn’t know they were looking for.

A standalone steamy rom com story set in my SEALs in Paradise world and featuring a character you’ve seen in my other books, Burbank-based TV producer Joanne Rossi, and a new character, Coronado Navy SEAL Jacob.
My SEALs in Paradise readers might remember New Millennia Media Executive Producer Joanne Rossi. She’s the one who bought retired SEAL Clay’s beach house out from under him in HOT SEAL, DIRTY MARTINI forcing him to become a most unwilling participant in a home renovation reality show. She’s also the one who relies on injured SEAL Nick to solve the mystery on set after the bride went missing in HOT SEAL, RUNAWAY BRIDE. Well, it’s Joanne’s turn for some lovin’ with a Navy SEAL of her own in HOT SEAL, COLD WATER.