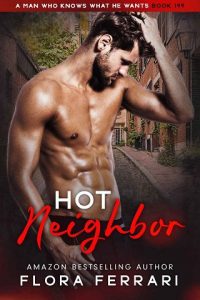 The girl next door has never looked so tempting…

When Landon moves to LA, he isn’t looking for anything more than a fresh start and the chance to get more hands-on as a physical trainer for his celebrity clients.
But the second he sets eyes on the dark haired beauty watching him from her window, the only thought in his mind is how he can get his hands on her as soon as possible.
Elena finds herself equally enraptured by the dark haired stranger whose blue eyes seem to pierce straight into her soul, and their first meeting leaves her electrified and wanting more.
Elena’s father, on the other hand, is less than thrilled by the sparks flying between Landon and 21-year-old Elena and isn’t afraid to show it.
Torn between this new, magnetic attraction and her devotion to her father, Elena is at war with herself. When she’s with Landon, everything seems so clear — the rest of the world doesn’t matter.
But she can’t keep walking this tightrope forever…

While Landon wants nothing more than to spirit Elena away from the suffocating ‘rules’ that keep them apart, he doesn’t want to make her choose between her family or him — although he’s never been a patient man.
He’s also never felt this way for anyone before, and the spell Elena has over him is captivating and unfamiliar all at once.
When tensions rise to a breaking point between Elena’s father and the enamored couple, she’ll find herself faced with inner turmoil she could never have imagined.

Will Elena be able to keep Landon without losing her father? Can she only have love if it comes with sorrow?