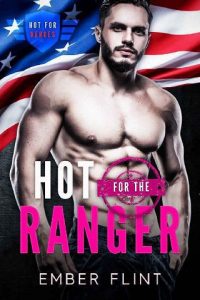 What if you made the perfect love connection and then you forgot about it?

37-year-old former Army Ranger Wyatt Ridge doesn’t remember much from his past —including that one week that had finally changed his lonely life for the better.
When he woke up, he was told he had no one, but that wasn’t true.
For seven days he had it all, then a cruel twist of fate took everything away from him.
It should be okay since he doesn’t recall a single moment of it, but it isn’t.
No one would believe that you could feel the loss of something you don’t even recollect ever having had in the first place, but Wyatt does: he feels the loss every day and he has for five years now, even if he has no name for his longing and the ache in his heart.

One bullet to the head should have killed him and he knows he is lucky to be alive, but he can’t help the feeling that his injury took something far more precious than breathing from him.
Now, he is an entirely different kind of ranger and his existence is one of stubborn solitude and hard work in the wilderness of a nature that is the one thing he does
remember loving from before.

What if you were sure to have found ‘the one’, only to end up waiting for a call that never came?

Five years ago, 26-year-old graphic designer Kenna Davis took a grudging break from studying to go on a brief oceanside vacation with her roommate.
A whirlwind romance with a stranger was the last thing she expected, but she got it all the same.
For seven days she had it all and everything was toe-curling kisses, fast-beating hearts, magic nights, and a head full of a happily-ever-after that she couldn’t wait to start living. And then he had to leave.
He told her they were each other’s forever and that she was his heart, and she believed him; how could she not when she could feel so deeply that he was hers?
He promised he would call soon, that he would come back for her and Kenna promised she would wait. And she did.

There are hateful days when she wishes she could forget it all, but most of the time she still longs for him. The memories that haunt her have kept her alone all these years, but they are still much sweeter than they are bitter, and she can’t let go of them yet, but maybe she can start to move on now.

She’s the part of his soul he didn’t know was lost.
He’s the part of her soul she can’t bear to forget.
And maybe, just maybe, the very fate that ripped them apart will finally throw them together again.