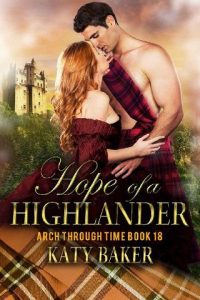 A modern woman looking for redemption. A medieval warrior running from his past. A love that might just heal them both.

Detective Layla Croft wants to escape. From her past. From her guilt. From all the mistakes she’s made.

Having run all the way to the Highlands of Scotland, she saves an eccentric old woman from a mugging, and is suddenly offered the escape she craves. Just not in the way she expected. Stepping through an arch and finding herself tossed into the fifteenth century, Layla is sure she must be losing her mind. None of this can be real, can it? Lost in an unfamiliar land, she’s desperate to get home. That is until she’s rescued by a rugged Highlander who might just hold the key to what she seeks.
The last thing Cinead Muir wants is to return to his childhood home. Too many memories. Too many reminders of what he’s lost. But with his father on his deathbed, he has no choice but to face his past – no matter how painful that might be. When he meets a beautiful woman on the road claiming to be from the future, and then a string of murders shatter the peace of the Highlands, he begins to wonder exactly what he’s returning home to.
Layla and Cinead soon find themselves in a deadly race to uncover the murderer before chaos engulfs the Highlands. Little do they know that their quest will uncover a conspiracy that goes to the very heart of Clan Muir itself. And to a secret that could shatter everything – even their burgeoning love.

Hope of a Highlander is the eighteenth book in the Arch Through Time romance series and can be read as a standalone novel. If you love sexy highlanders, feisty heroines and sizzling passion you’ll love this tale of danger, passion and true love in the Highlands of Scotland. Grab a copy now!