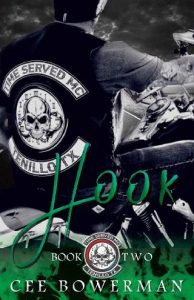 Hook York, Tenillo’s veterinarian and the man who hasn’t ever been able to resist coming to the rescue of any animal or person who needs him, is living a good life. He’s got a house he loves, a pet he adores, his best friend and her daughter who keep him humble and feed him home-cooked meals whenever he appears at their house, and his motorcycle club brothers who are more like family than anything he’s ever had before. He doesn’t realize what he’s missing until he finds the woman who doesn’t want to be rescued. It will take all he’s got to win her over, and when he does, he’ll protect her at any cost.

Paula Clewley appeared in Tenillo seven years ago – a woman with only one friend in the world and a family she could never go back to. After years of making her way alone in the world, ready to disappear again without a trace at any time, she was content with the life she had made for herself. A new friend brought excitement to her days and a chance at love she’ll have to try hard to resist.

While both of them hide big parts of themselves from each other, Hook and Paula navigate the turbulent waters of a new relationship. Over time, they realize there’s no sense in trying to live your life alone when love is right there within your grasp. Hook’s actions put Paula in danger, but after years of protecting herself, she’s ready to do whatever it takes to get back to the new life she’s made and the man she loves.

Paula knows that Hook will be waiting for her with open arms and the smile she loves, and Hook knows he’ll never let her go once she comes back home.