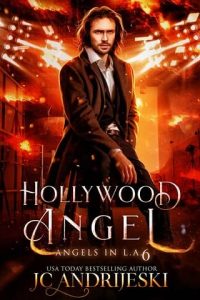 P.I. and fallen angel, Dags Jourdain, thought he was finally in good with the L.A.P.D., after helping out with a number of tough cases.
All that changes when Dags’s high school pal and mortal enemy, Uri Kominsky, son of one of Los Angeles’ most notorious crime lords, shows up dead. When hikers find Uri’s half-naked body in Griffith Park, skewered by a sword, Dags ends up high on their suspect list. Even Dags’s homicide detective pal in the L.A.P.D., Kara Mossman, stares at him too long these days, as if trying to decide just how much of a murderer he is.
They’re not exactly wrong.
Let’s just say the issue’s complicated, given how many people Uri murdered over the past however-many years.
Then Dags gets an alibi from an unexpected source, and Kara asks for Dags’s help on a related case, one involving a super-famous Hollywood type, someone who’s gone missing, potentially dead, potentially murdered.
Given everything going on, Dags feels he can’t say no, but the case isn’t as separate from Uri’s death as he thought. Dags knows all the players, including a woman entwined in his past in ways he can’t bear to think about. The whole thing dredges up the very worst parts of his life, and the worst parts of Dags himself. It involves every dirty secret between him and the mafioso family of the man, Uri, he’s accused of murdering.

WARNING: there are some tough themes in this one, including (teenaged) child abuse and the emotional fallout around that, as well as adult language and violence.