Home
contemporary romance
His Will by Ella Goode (ePUB) 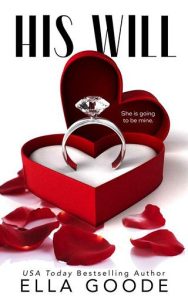 Jericho Bancroft has zero plans to accept the bequests in his cousin’s will. He doesn’t even want to attend the reading of the will because that means seeing Michael’s widow —Sera James. The only one he’s ever wanted but could never have. She belonged to someone else…. or so he thought.
When Jericho lays eyes on Sera, he wants to claim her and now that Michael’s gone there’s no reason to resist other than Jericho’s own conscience and the idea of him not being the only man to truly own her heart and soul.
Sera James fell in love with Jericho Bancroft when she first met him, but she could never confess her feelings to him because she has a secret to protect for the man that all but saved her life. While their marriage might not have been traditional, he gave her a sense of family. Something she’d never had.
Things are never as they seem. When the truth finally comes to light will Jericho be able to repair the damage he’d caused by pushing away the only woman he would ever love?