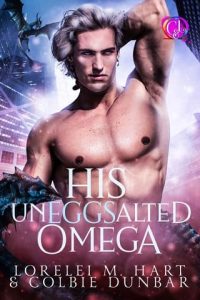 Alpha Dragon shifter Kirin never wanted a mate. He sees firsthand what the loss of a mate could do to a man each time he looks into his father’s eyes. No, the single life is exactly what he needs, and the odds are in his favor. Not a single dragon in his flight presented himself as his fated when Kirin shifted for the first time on his twenty-fifth birthday. He is in the clear…that is until he decides to represent his company at the upcoming trade show and everything changes in a flash…or is it a shift?
Omega Chipmunk shifter Aldo didn’t mind being latent. In fact, he kind of liked it. Being latent means he doesn’t need to take his father’s place as king of the chipmunks. What a pretentious title that is for a pack alpha, not that anyone asked Aldo’s opinion. Instead he gets to run his furniture store and be left out of politics completely. He loves it. That is, until he goes to the country’s largest furniture trade show and shifts for the first time—in public—after bumps into his true mate.
Aldo’s life turns upside down in an instant and, if it wasn’t for the smexy dragon who instantly went into protective mode, it could’ve been much worse. But, now what? He has a mate, his chipmunk is wanting to run around free —not once caring about human ways —and he’s expected to take his place as prince of his kingdom.