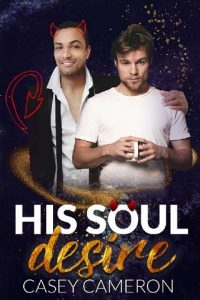 In retrospect, Sean really shouldn’t have cast that demon-summoning spell. In his defense, he honestly thought the whole thing was fake.
Well, it turns out demons exist. See exhibit A: Gideon, the demon currently residing in Sean’s living room. True, he doesn’t look so much “dark lord” as “tall, dark, and handsome,” but he’s shockingly powerful, and despite his wisecracks and nonstop innuendo, his purpose is sinister.

Sean’s soul in exchange for a favor: that’s Gideon’s bargain, and he won’t settle for anything less. Sean may be new to the demon-summoning business, but he still knows better than to sell his soul, even with unlimited power on the line.
So…how do you un-summon a demon? Unfortunately, the answer lies at the other end of a thousand-mile road trip, with Gideon riding shotgun. A lecherous demon makes a terrible road trip companion—when he’s not trying to talk Sean into making a demonic bargain, he’s trying to talk him out of his pants, and that might be just as dangerous. It’d be easy to say no if Gideon were pure evil, but the more Sean gets to know him, the more he starts to wonder if a demon could be a decent person. Between Gideon’s charm, good looks, and unexpected warmth, Sean has to keep a tight grip on his virtue.

And to make things worse, there’s another demon on their tail who will see this bargain completed at any cost—even if that means destroying them both. Time is running out in the race to keep their lives—and Sean’s soul—intact. Can Sean and Gideon find a way to work together before the road ahead becomes a literal highway to Hell?