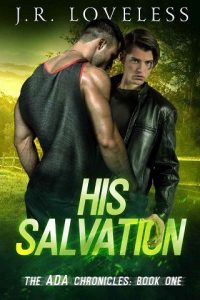 A jaded man surrounded by walls thick as steel and a naïve telepath who is determined to capture his heart. Can his defenses stand strong or will the younger man find a chink in his armor?

Gabriel works to keep everyone at arm’s length, his past driving him to avoid emotional entanglements. Until he is sent on a mission to save twin brothers with abilities hauntingly familiar to his own and one of them stirs feelings inside of him he’d long since buried. He tries to distance himself at every turn only his boss orders him to train Alex on how to control his ability, putting him in close quarters with the younger man.

Alex and his twin brother are held prisoner by a faction hell bent on using them for their powers until a mysterious group of strangers breaks in and rescues them. He can’t seem to ignore the intense attraction he has toward their brooding and gorgeous leader, but Gabriel freezes him out at every turn. Alex is given the chance to find a crack in Gabriel’s walls when they end up on the run together, alone.

Dangers surround them from every direction and the clock is ticking. When Gabriel’s ghosts become all too real, he must decide between reliving his past or saving Alex. Failure is not an option in the world they live in and Alex refuses to give up on Gabriel, intent on showing him their pasts don’t define them.

Please note this is a re-release of a story previously released by Dreamspinner Press and has now been self-published.